Let’s look back and ponder.

On November 6, 2005, the first two articles were posted to Giant Robots: The Correct Amount of Planning and Try Ruby!.

The first article was about keeping a mindset of moderation and the second was an enthusiastic recommendation for what would become one of our favorite programming languages.

thoughtbot was about 5-10 people working above a futon store in Cambridge. The team later moved to the 3rd floor of 41 Winter St, the same building our Boston team is in today.

We ran FancyBSD on fly white Apple laptops, except Mike, who was running FreeBSD and convincing us Vim was cool.

The blog was run on Mephisto, an open source blogging platform written in Ruby. Perhaps we originally pulled the source from Rick Olsen’s classic svn.technoweenie.net Subversion instance, the home of many awesome early Ruby and Rails libraries.

Articles went quickly from someone’s mind to their fingertips to published on the blog, sometimes followed the same day by an article advocating an opposing view. 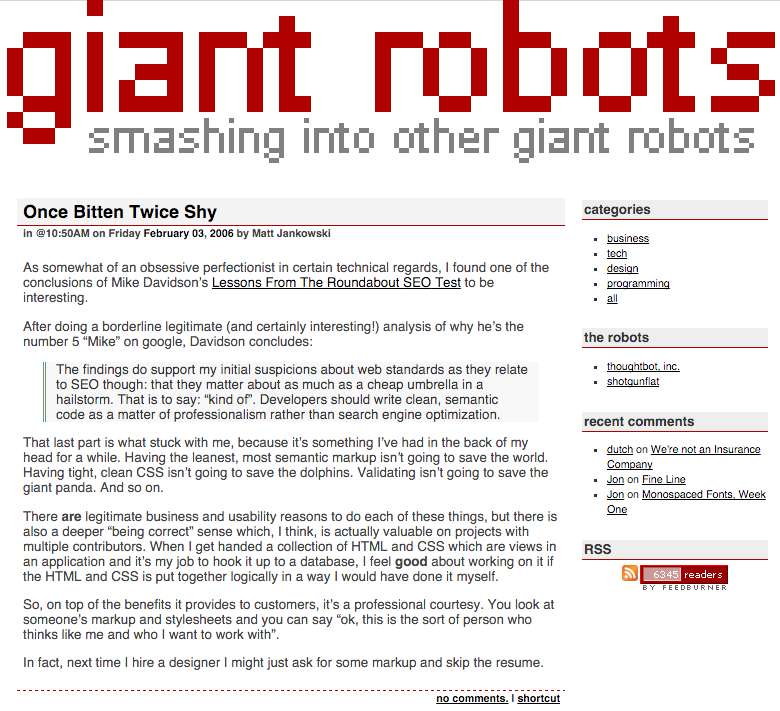 During this era, the blog was the primary place where we announced the release of open source libraries such as Paperclip, Shoulda, Factory Bot, and Clearance.

The blog was on Tumblr from August 2009-October 2013. Our Tumblarity was high. 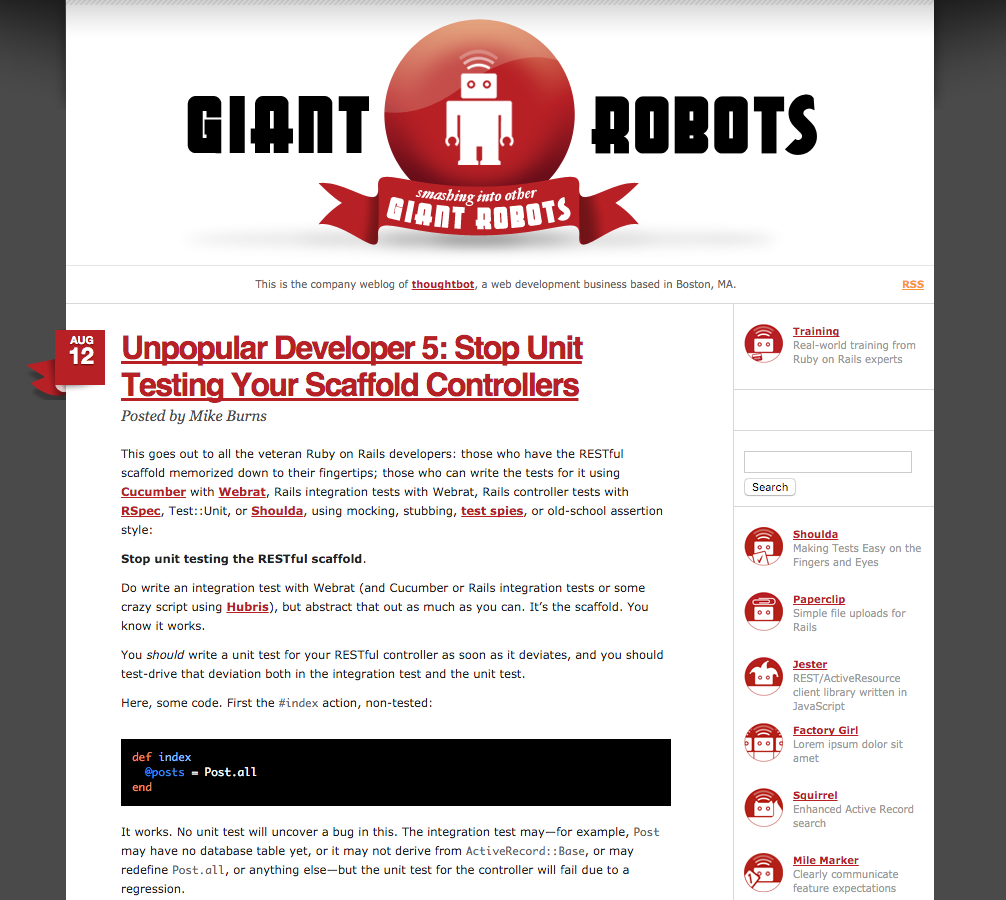 Classic articles in this era included:

During this era, we announced the release of open source libraries High Voltage, Capybara Webkit, Bourbon, and Griddler.

We wrote a LOT about Cucumber before moving our tests to RSpec and Capybara.

We announced on the blog features to our products such as Hoptoad, which would later be renamed Airbrake. Those features included integration with the Lighthouse issue tracker, then deploy tracking, then GitHub integration.

We began a tradition of writing Thanksgiving thank you articles.

We announced the opening of our Stockholm, San Francisco, Denver, Philadelphia and Raleigh offices.

We didn’t do much to promote the content except tweet about each article once. We were publishing about 1-2 long-form articles/week.

Some aspects that made Tumblr great for a business blog were:

Some things that weren’t working so well:

We then moved the blog to Middleman, a static site generator written in Ruby. This era lasted from October 2013-February 2015. 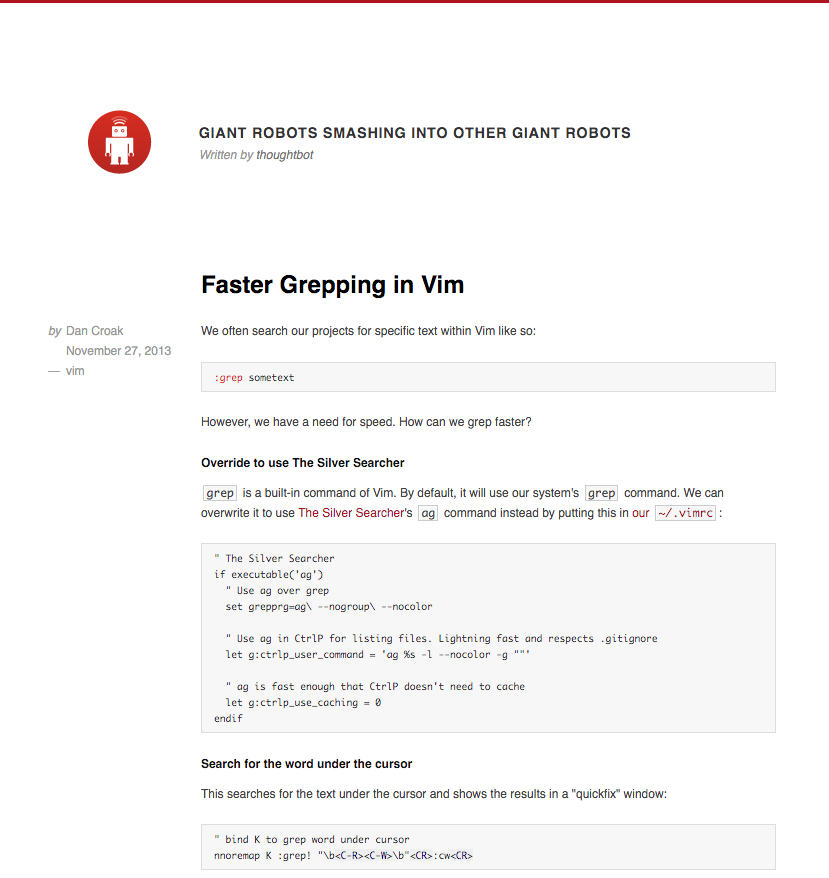 Our primary goal was to have a GitHub-based blogging workflow, which encouraged more contributions from our team, who are all designers and developers.

Some aspects that may have contributed to that success:

We announced the opening of our New York City and Austin offices.

During this transition, we kept the Tumblr blog, and moved it to a new domain, http://thoughtbot.tumblr.com.

Since then, we added a Zapier RSS-to-email zap to automatically post our aggregated content from our blog, podcasts, and Weekly Iteration video series.

Tumblr provides a custom email address for each Tumblr blog so the zap sends an email for each new RSS entry.

We aggregated those sources at http://rss.thoughtbot.com with a custom open source RSS script written in Go.

The classic articles from this era included:

We announced the release of open source libraries rcm, gitsh, and Liftoff.

We announced the release of our Continuous Integration service for style checking, Hound, and our form backend service, FormKeep.

We renamed our online training service to Upcase.

We began announcing the release of books such as Ruby Science and iOS on Rails and announced new podcasts such as The Bike Shed.

Here’s the chat that led us away from static site generation:

Magnus G. Ok, I have pushed to production on the blog. That was scary. Crossing my fingers I didn’t burn anything down.

Joe F. could we separate the content/code repos and trigger a reload of content via a GitHub post-receive hook?

Middleman let us review articles on GitHub, but scheduling posts for the future was complicated. Because Middleman is static, future-dated posts wouldn’t exist on production, so we had to deploy on the day we wanted to publish.

Given how many people contribute to our blog, this became untenable – people were often on client work and would forget to merge on a specific day.

We had a hacky solution that rebuilt Middleman every day with a Heroku Scheduler job, but we felt we needed a new platform.

In February 2015, we built our own blog engine named Maitre-d. It is tailored to our preferred authoring workflow: Markdown documents + GitHub pull requests.

Maitre-d abstracts away the technical architecture and deployment aspects of the blog, allowing authors to focus on writing Markdown documents. We have a separate repo that contains only Markdown documents for all the posts.

Maitre-d receives a webhook when new content is merged in the Markdown repo. We extract the metadata (like tags and author), save it to the database, and serve it.

Maitre-d also handles auto-publishing articles based on the date in their filename. We kept page load fast by continuing to put everything behind the Fastly CDN.

Our readership stayed pretty stable with an average of 180,000 readers/month. 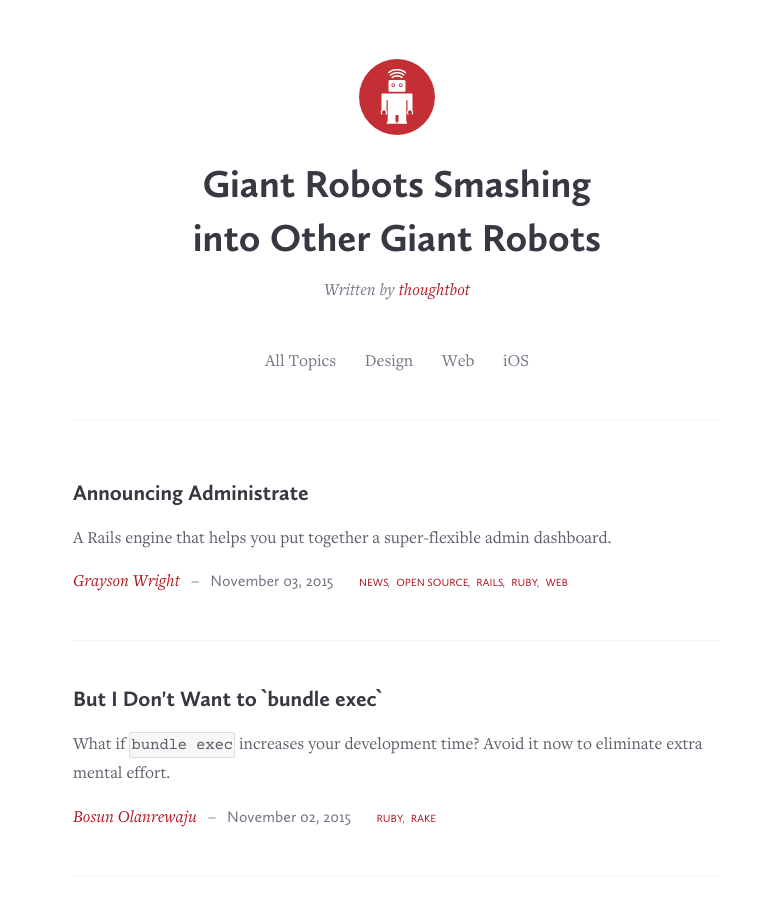 Some of the classic posts from this era:

These past 10 years have been a labor of love for us, fine-tuning our process and taking control of the tech as we go. A company blog is a great place to work together as a team and create something that codifies various ideas we have day-to-day.

Here’s to the next ten years!