I’ve been using tmux for about six months now and it has become just as essential to my workflow as vim. Pane and window management, copy-mode for navigating output, and session management make it a no-brainer for those who live in the terminal (and especially vim). I’ve compiled a list of tmux commands I use daily to help me work more efficiently. 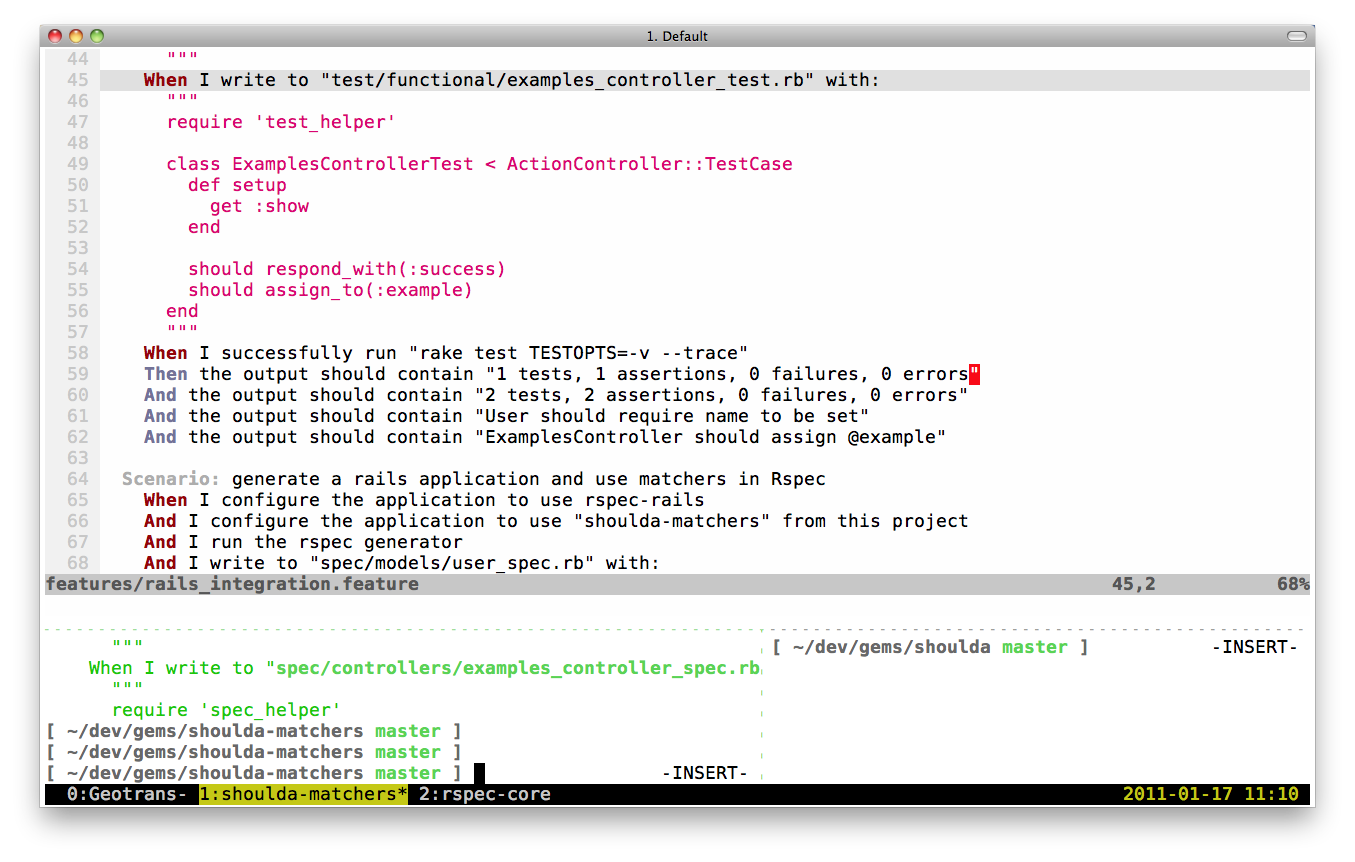 If a tmux command I mention is bound to a keyboard shortcut by default, I’ll note that in parenthesis.

They’re accessed by entering a key combination called the prefix and then typing a letter.

For example, if you see prefix + d below, that means you would first hit (and release) Control + b and then type d.

The prefix can also be changed, which I’ll show you how to do later.

Sessions are useful for completely separating work environments. I have a ‘Work’ session and a ‘Play’ session; in ‘Work’, I keep everything open that I need during my day-to-day development, while in ‘Play’, I keep open current open-source gems or other work I hack on at home.

tmux has a tabbed interface, but it calls its tabs “Windows”. To stay organized, I rename all the windows I use; if I’m hacking on a gem, I’ll name the window that gem’s name. The same thing goes for client applications. That way, I can recognize windows by context and not what application it’s running.

Panes take my development time from bland to awesome. They’re the reason I was able to uninstall MacVim and develop solely in iTerm2. I don’t have to switch applications to switch contexts (editing, reading logs, IRB, etc.) - everything I do, I do in a terminal now. People argue that OS X’s Cmd+Tab is just as fast, but I don’t think so.

These are some of my must-haves in my tmux config:

During the day, I’ll work on one or two Rails apps, work on my dotfiles, run irssi, and maybe run vim in another window to take notes for myself. As I mentioned, I run all of this inside one tmux session (named work) and switch between the different windows throughout the day.

When I’m working on any Ruby work specifically, I’ll have a 75%/25% vertical split for vim and a terminal so I can run tests, interact with git, and code. If I run tests or git diff and want to see more output than the 25% allots me, I’ll use tmux to swap the panes and then move into copy mode to see whatever I need to see.

Finally, I run iTerm2 in full-screen mode. Switching between OS X apps for an editor and a terminal is for chumps!

If you found this article useful, you might also enjoy: