We had the pleasure of working with the SumIt team on bringing their Beta product to life. SumIt is a money management platform for freelancers, solopreneurs, and the self-employed but has the long-term goal of growing into a robust platform that expands into more functionality. I sat down with the Co-Founder of SumIt to discuss the journey SumIt has taken from concept to Beta launch.

The pandemic was a catalyst for change, and as folks shifted their work into their homes, there was a growing desire for more flexibility and freedom. This resulted in an increase in independent workers and a growing audience of freelancers and solopreneurs who were looking to deliver value and make a living while doing what they love on their own time. In seeing this audience growth, the shift in how individuals were categorizing “work”, and the gap in right-sized support for this growing audience, the idea for SumIt presented itself.

Validation and research was the first step in deepening the understanding of the target audience and the opportunity in the market. The team had lots and lots of conversations with freelancers to dig into their day to day workflow, needs, and motivations. In total this research phase extended across 9 months and used a variety of tools to collect insights. 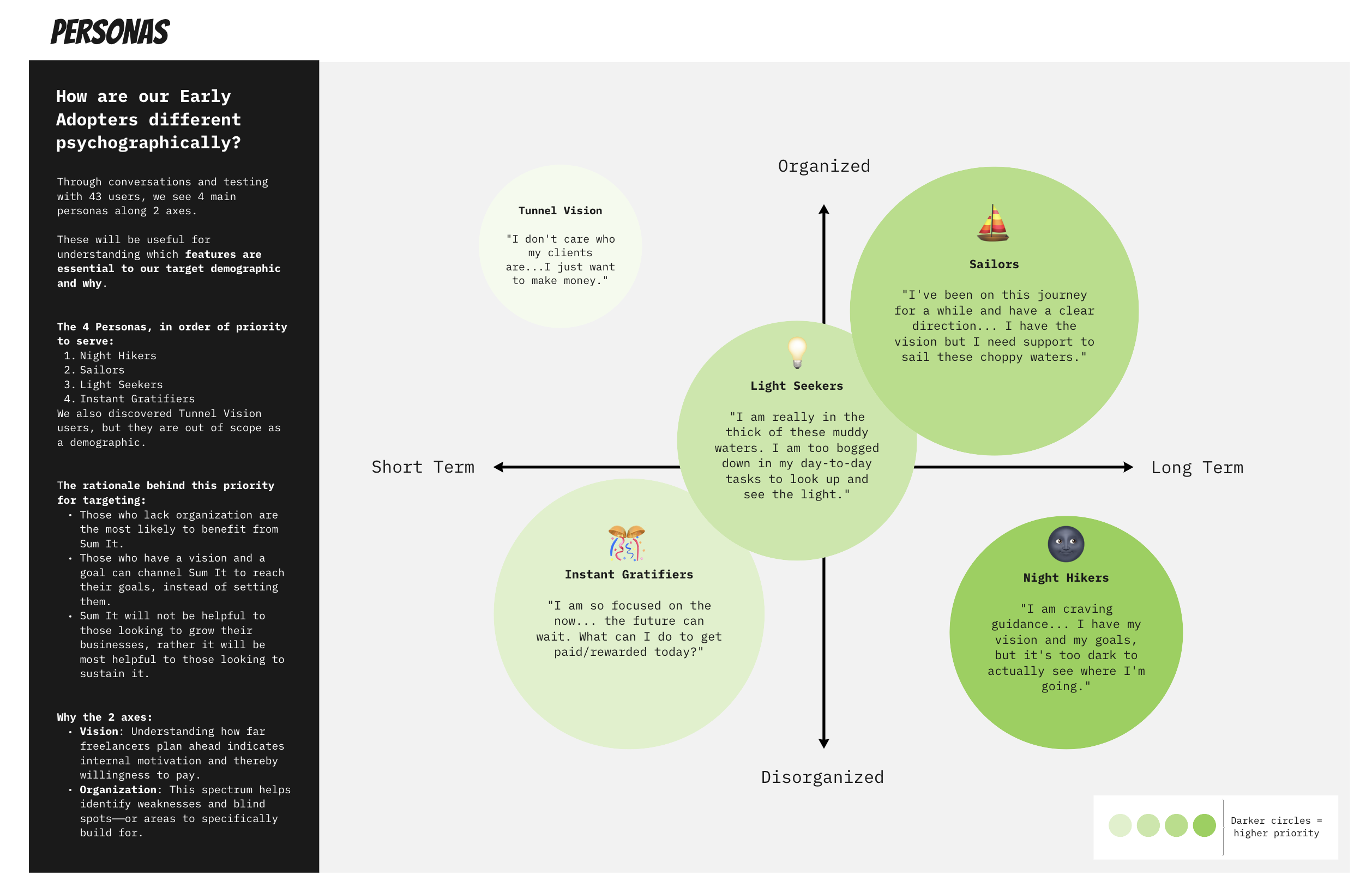 There were quite a few rounds of testing with target users and the team tapped a variety of formats such as 1-1 interviews, storyboard co-creation, and usability testing with clickable prototypes. The team also tested for real market needs in the form of landing pages and Paid Ads to see what resonated.

The goal was to learn a lot more about a user holistically and not just their thoughts on a potential feature set and product experience. We discovered freelancers love what they do, but running their business successfully requires them to step into a lot of other roles like accountant, sales person, and legal team. They want to make more room to do more of what they love, and are using a variety of tools to manage their work.

“By starting with such a robust research phase, we were able to keep in mind our users through all future stages of the product, like the UI/UX design, writing acceptance criteria, and defining the overarching strategy. This was a big part of being able to define a user-first solution.” - SumIt, Co-Founder 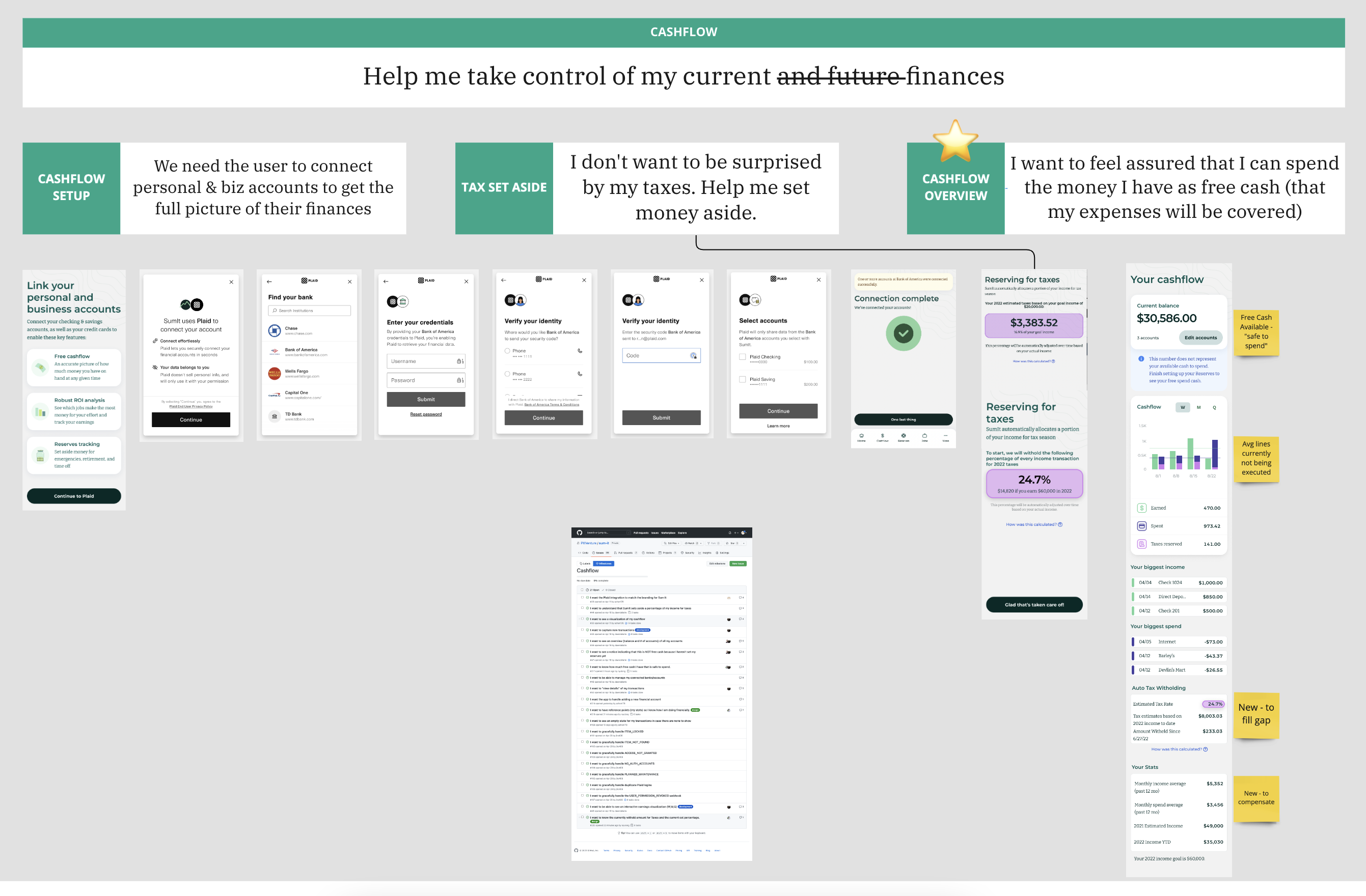 Opportunity In The Market

In conducting a competitive analysis of comparable products, and reviewing the market as a whole, we uncovered that freelancers were struggling to find a tool that balanced their needs without being too large and cumbersome. If they used a third party tool, it tended to do a lot more than they needed and was confusing at times. For folks tracking things manually in spreadsheets and Notes app, time was spent tracking status, there were issues with data consistency, and trying to uncover actionable insights.

It was clear that there was an opportunity somewhere in the middle, between large, complex solutions that freelancers were trying to make work, and manual workflows that quickly became outdated. We also chatted with finance experts to understand what data points would best allow trends to be detected in both the short and long term. 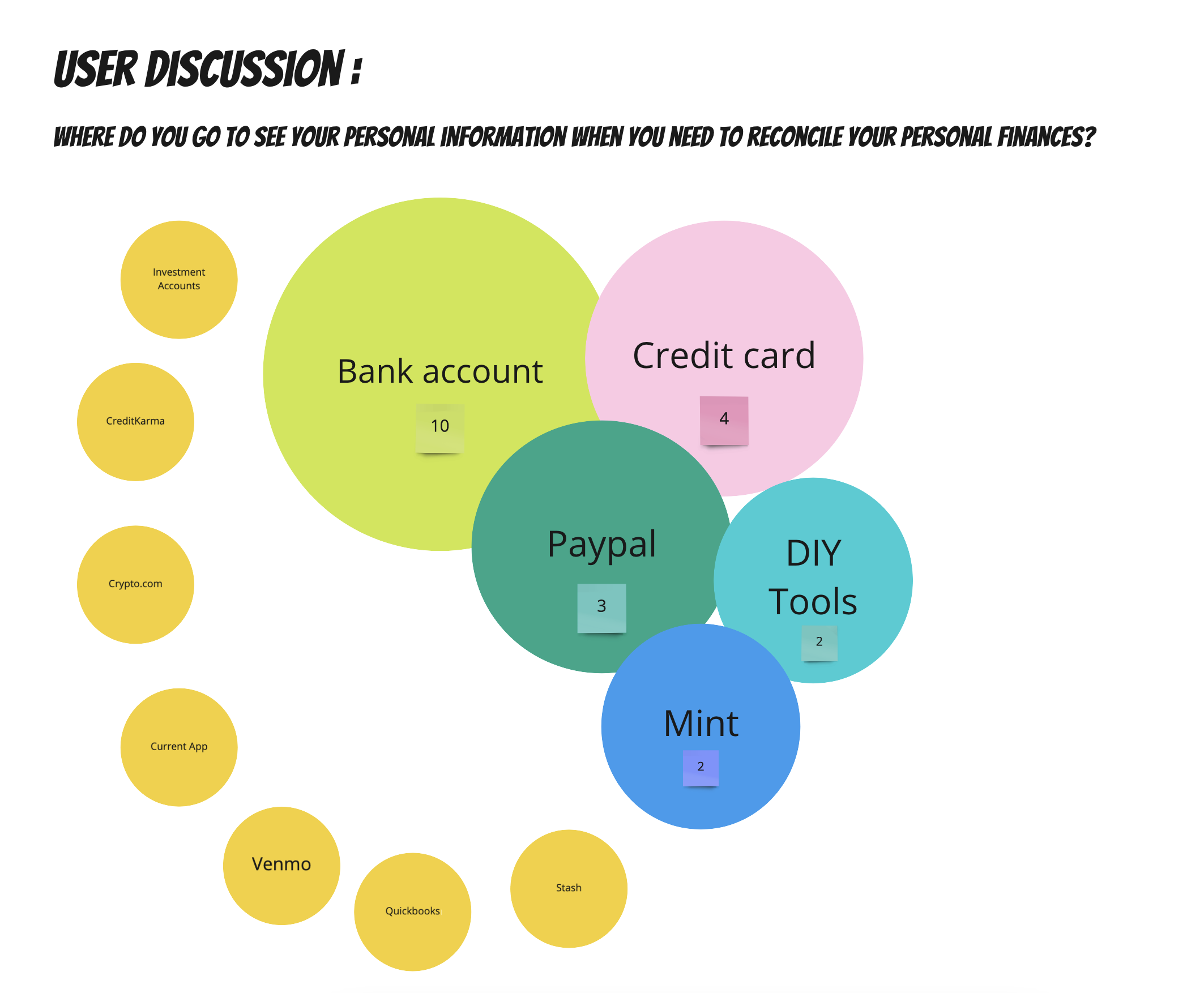 Parallel to the product itself, ideas began to take shape in the form of a business plan which was tested as well. As we started to see trends, we worked to bring all these pieces together, and the plan for the Beta launch and first external milestone began to take shape.

Our research and in-market tests uncovered lots of ideas for providing value to our target audience. For Beta, we set out to do 2 - 3 things really well, and in identifying those 2 - 3 things, we worked to understand the impact they would have for users and the effort it would take to bring them to life. 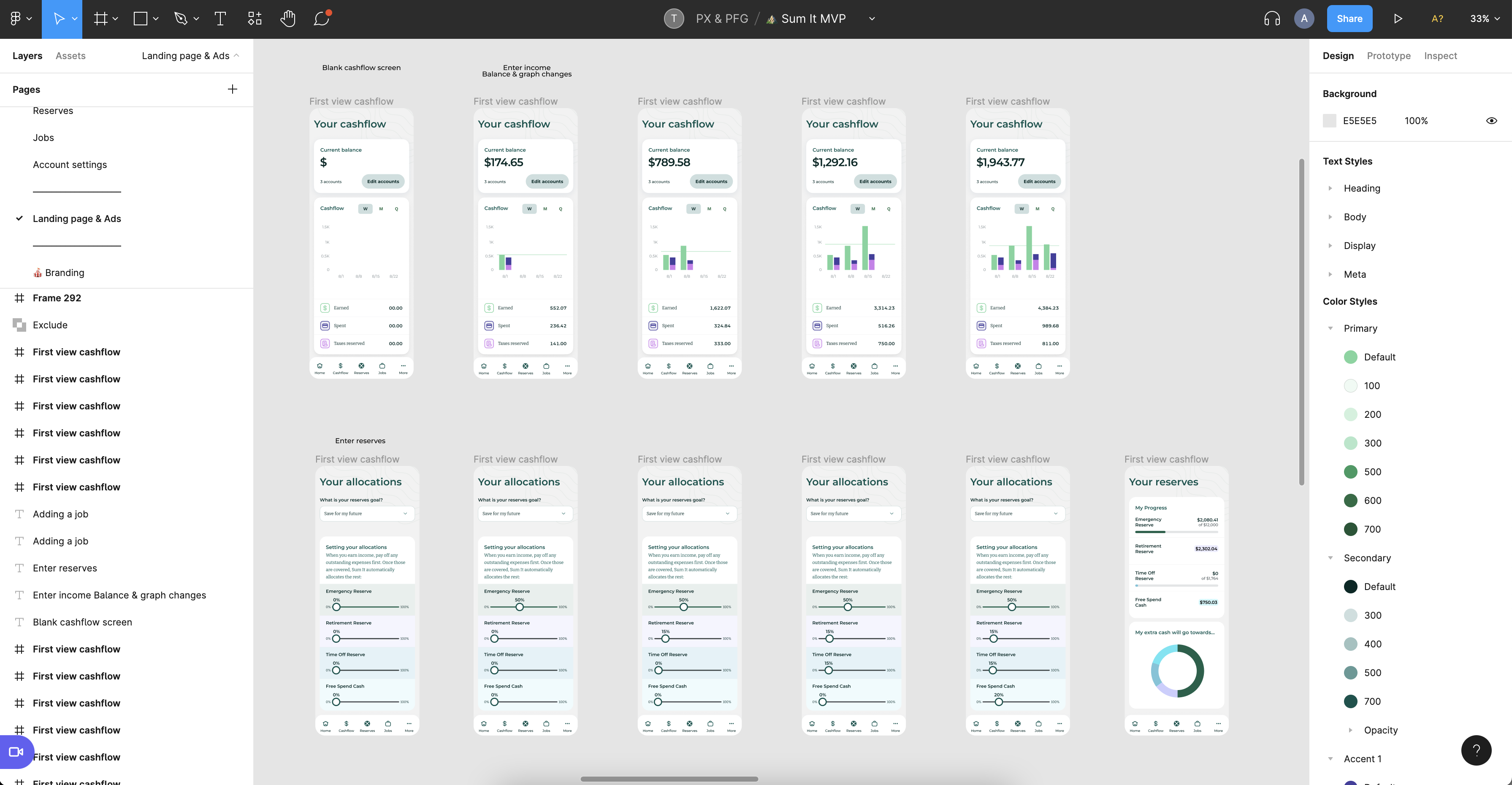 Working together, prioritization and collaboration was the name of the game. The entire team was remote and regular checkpoints and asynchronous tools were used so we could stay in close communication. Understanding the Beta Milestone timing was firm, we synced regularly on the priorities and made changes as needed to maximize our velocity and the impact of our first version. Marching towards a large launch milestone is exciting but can also be a bit stressful, and we appreciated the positivity, trust, and close partnership our teams were able to foster.

The goal of our Beta launch was to ship a real life product that could be formally promoted into the market. We were looking to onboard new users, and have them really see the value in SumIt, in a way that makes us “sticky”. If we do our job well, they should successfully onboard, and come back to engage again and again as the value should only deepen over time.

What’s Ahead For SumIt

Now that Beta is live, the work doesn’t stop. The focus currently is optimizing our strategy for attracting, acquiring, and creating value for new users. For a new product, especially in fintech, earning the user’s trust is important. The messaging set out to be authentic and clear. During our Beta, we continued to test, experiment and pivot at minimum on a week by week basis. 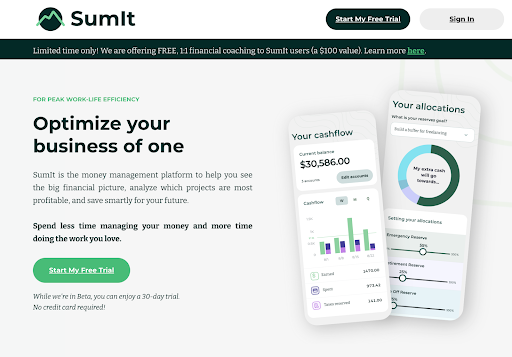 “Growing a new brand and user audience is tough, but the ability to stay agile and be resilient is what helps us best navigate and do our best in proving ourselves. We set out to serve the needs of freelancers, with a mission to help them achieve financial security. How we move forward will continue to be shaped by the users and where the market needs SumIt to go ” - SumIt, Co-Founder

We see a natural progression of growing a user audience, providing value, and adding the next most impactful feature to support more of the freelancers day to day workflow. We choose finance as the place to start, but feel confident that SumIt has lots of expansion opportunities ahead.

Beta is now live and if you are a US-based freelancer or a solopreneurs, we encourage you to check it out.

If you have your own product idea, and want to chat with thoughtbot about bringing it to life, we would love to work with you.