thoughtbot has been a passionate and active participant in the Ruby on Rails community and are proud to be a contributor in the open source community. Each year thoughtbot participates in RailsConf and were fortunate enough this year to have a few thoughbotters join as speakers.

Here are links to the presentations given by our team members:

Also a s/o to Stephanie Minn who joined a “Diversity in Engineering; a community perspective” panel.

I had the pleasure of chatting with the team after the event and wanted to share more of what went into preparing their talks and things they are taking away from the 2022 session.

How did you come up with your topic?

The talk was inspired by some recent test performance work I did. I asked myself the question “What do you wish more people knew?” during the CFP to help generate ideas and this one won out. - Joël Quenneville

I had recently learned about Rails engines and, ~4 years into working with Rails, I was surprised I hadn’t encountered them before. I was excited to dig into engines and wanted to provide an introduction I wish I had for other folks. I also used this talk as a catalyst and motivation for learning something new. - Mina Slater

During my time as consultant, I’ve had the need of working in a copy of production data in my machine and the solution so far was to get a exact duplicate of said data, which involves a security issue now that private information from users is in my machine. I explored techniques to mitigate this while giving a subset of data and this talk is one of the strategies that I’ve been using. - Fer Perales

Coming out of bootcamp, I was instilled with the desire to have more of a TDD approach, but didn’t get much instruction on how to actually do that. So instead of jumping right in, it took years to turn my thinking around to test first. I love a good flowchart and the technique I described formed out of my own personal experiences trying to learn to test first, shaped by the devs I paired with along the way. This is actually a talk I’ve been submitting to Railsconf for years. Every year since 2018 I think. Just a reminder that your proposal might be good, but didn’t fit the program etc, and to take it in stride and re-submit re-submit if you think you’re onto something! - Aji Slater

What was your favorite part of the event?

A favorite part was a few speakers doing late-night dry runs of our talks in the hotel lobby. I loved how supportive and creative everyone was and it gave me a big confidence boost. - Joël Quenneville

Since this conference happened the week before I started at thoughtbot, it was a really great opportunity to get a head-start connecting with people I will be working with. I got to meet Fer in person, and reconnected with Joël, whom I’d met at a previous Railsconf. - Mina Slater

What was your biggest takeaway?

Multiple talks mentioned the value of profiling. I’m inspired to run some one-off diagnostics on my current app to get a snapshot of how it’s doing as well as set up a collection of recurring metrics to see how things change over time. - Joël Quenneville

Joël and I participated in a competition in the expo hall one of the afternoons. It was to write a competitive script in an assembly-style language, which I had never done before, and often considered as something that “I just didn’t get” or “couldn’t wrap my head around.” But we sat down and hammered it out and won the contest! Another win for growth mindsets and iteratively working through a problem. It’s all possible to understand with patience and curiosity (especially if you bring a pair along). - Aji Slater

What surprised you about this year’s event?

After going without in-person conferences for the last 3 years, I was pleasantly surprised that my ability to network and talk to strangers didn’t atrophy. In fact, I must’ve had pent-up social energy because I actually found it easier than pre-pandemic. I spent most of my time in the hallway track, meeting and chatting with other Rubyists and being inspired by all of their work! - Mina Slater 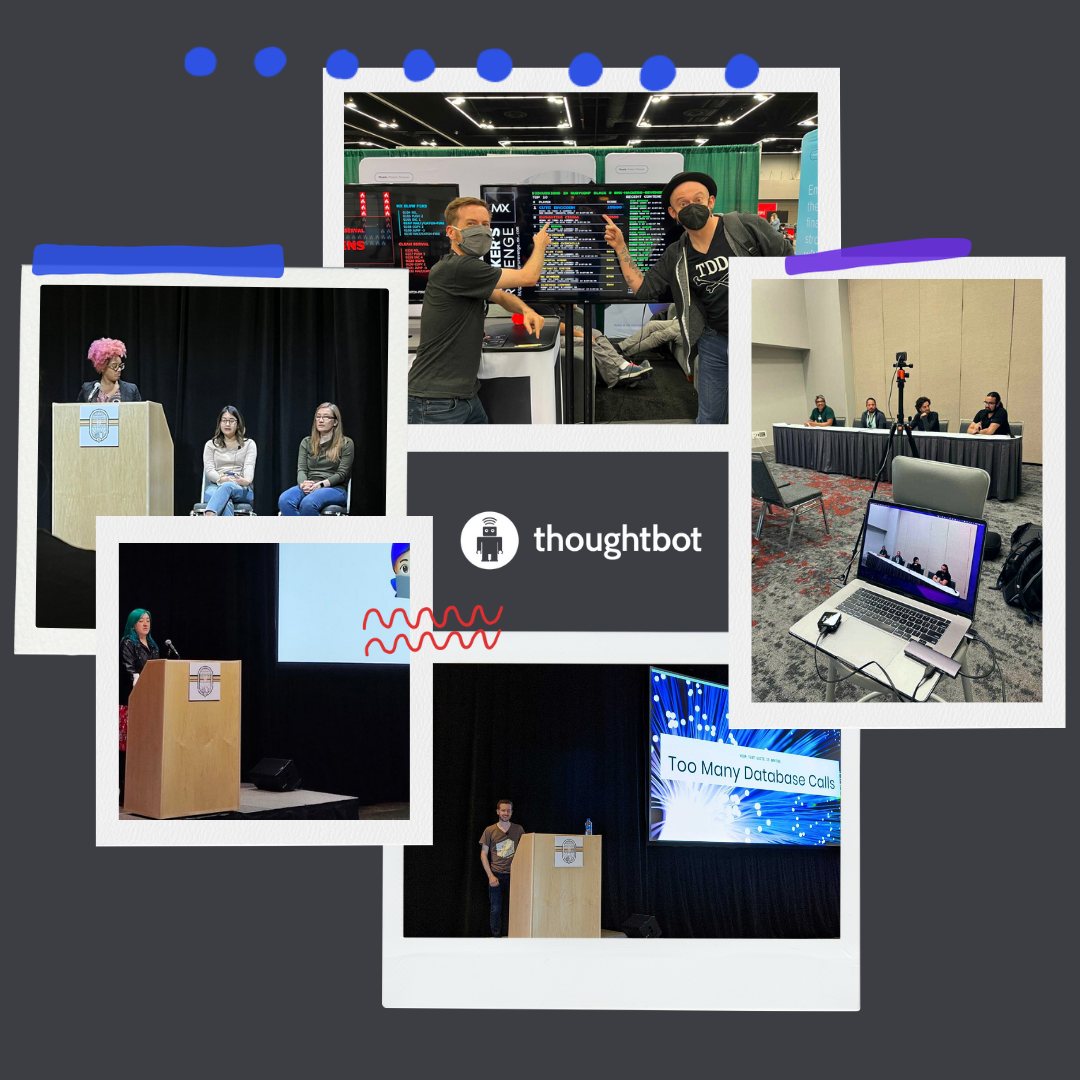 To hear the sessions, there is still time to sign-up for Home Edition. We hope to upload the sessions to our Youtube channel as well.

Subscribing to our blog, and following thoughtbot on socials also keeps you in the loop on future events and Rails thought leadership.