React Redux recently released version 7.1, which includes long awaited support for React Hooks. This means that you can now ditch the connect higher-order component and use Redux with Hooks in your function components. This post will take a look at how to get started using Redux with Hooks and then explore some gotchas of this approach.

Hooks were added to React in 16.8 and allow you to access things like state, React lifecycle methods, and other goodies in function components that were previously only available in class components.

Could be rewritten as a function component using Hooks like this:

The code is more concise and allows teams to make more use of function components without having to convert them to class components as soon as they need state or access to the React lifecycle. This post isn’t really about Hooks in general, so I’d check out the excellent Hooks documentation if you’d like to learn more.

How to use Redux with Hooks

React Redux now includes its own useSelector and useDispatch Hooks that can be used instead of connect.

useSelector is analogous to connect’s mapStateToProps. You pass it a function that takes the Redux store state and returns the pieces of state you’re interested in.

useDispatch replaces connect’s mapDispatchToProps but is lighter weight. All it does is return your store’s dispatch method so you can manually dispatch actions. I like this change, as binding action creators can be a little confusing to newcomers to React Redux.

Alright, so now let’s convert a React component that formerly used connect into one that uses Hooks.

Now, with the new React Redux Hooks instead of connect: 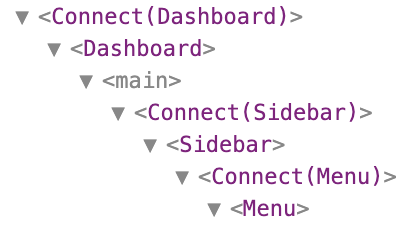 useSelector diverges from mapStateToProps in one fairly big way: it uses strict object reference equality (===) to determine if components should re-render instead of shallow object comparison. For example, in this snippet:

useSelector is returning a different object literal each time it’s called. When the store is updated, React Redux will run this selector, and since a new object was returned, always determine that the component needs to re-render, which isn’t what we want.

The simple rule to avoid this is to either call useSelector once for each value of your state that you need:

or, when returning an object containing several values from the store, explicitly tell useSelector to use a shallow equality comparison by passing the comparison method as the second argument:

There is a section in the Redux Hooks documentation that covers this in more detail.

Note: this section has been updated since the article was first published. I originally recommended sticking with connect over the Redux Hooks but have since come to prefer using the Redux Hooks.

We intend for Hooks to cover all existing use cases for classes, but we will keep supporting class components for the foreseeable future.

While there is no need to race off and convert all your existing code, our recommendation for new code is to generally prefer function components and Hooks over using class-based components and higher-order components. Using the Redux Hooks aligns with this recommendation and provides other key benefits over connect.

The main benefit of using the Redux Hooks is that they are conceptually simpler than connect. With connect, you are wrapping your component and injecting props into it. This can make it difficult to determine in the component which props come from Redux and which are passed in. If you are using TypeScript, correctly defining the types of connected components can be quite a chore for this reason. The Redux Hooks, on the other hand, are just regular hooks that don’t modify the public interface of your component. In TypeScript projects, I create my own useSelector that is typed to my store, and then I get type-checking everywhere I use it. Easy!

While the Redux Hooks have many benefits, there is one benefit of using connect instead of the Redux Hooks, and that is that it keeps your component decoupled from Redux. You can then test the component or prototype it in tools like Storybook without having to connect the component. An earlier version of this article recommended continuing to use the connect middleware instead of using the Redux Hooks for this reason. While this reasoning is still valid to an extent, I’ve since found that in tests and prototyping tools, I almost always wrap my components in a Redux Provider and test them in the context of being connected to Redux anyway. It’s just easier since my component might have a descendent that is connected to Redux and therefore still need to be connected.

React Hooks are a useful new feature, and React Redux’s addition of Redux-specific hooks is a great step toward simplifying Redux development.