Fastly is a content delivery network (CDN). A CDN is a system of distributed servers that deliver web content to a user based on geographic location.

You and my coworkers are reading the same content, just delivered from different locations to accelerate load time. But what if the blog post has a typo and I push up a new version? How will these distributed servers know that the content they hold has changed?

The answer to these questions is: cache invalidation. But what does that really mean?

Caching, most generally, refers to any way a computer stores something so that it can be quickly accessed later on. Browsers, for example, cache web pages by storing a copy of the pages you visit and then use that copy when you re-visit rather than retrieving all of the data from the web server again.

The simplest way to do cache invalidation is to “purge” the entire cache each time a change is made in your application. This means that you tell service that is caching your site - in this case, Fastly - to retrieve all new content because the cache is no longer a valid representation of your site. This can work nicely for a relatively static site, such as a blog, that is only updated once a day. But what if your blog has comments and gets a new comment every minute?

This is where Fastly really shines. As opposed to requiring you to purge the entire cache for every change to your web application, Fastly uses what they call “surrogate keys” to dynamically determine which pages of your application need cache invalidation and which remain the same.

Think of the Surrogate-Key header as a map that tells Fastly where each item in your system appears. When that item changes, Fastly goes to each location on the map and refreshes the content so that it is up to date.

A note about edge caching

Confusingly, Fastly’s documentation uses the terms “CDN” and “edge caching” interchangeably. Edge caching is a specialized form of edge computing, an umbrella term that refers to pushing “applications, data and computing power (services) away from centralized points to the logical extremes of a network”.

Edge caching is a form of caching that uses de-centralized servers “to move content ‘closer’ to the end-users that view it to avoid the latency that occurs as packets traverse longer distances across the network.” Fastly provides an edge caching service through its CDN.

Now that you have a basic understanding of how Fastly works, let’s dive into implementing Fastly in a Rails application.

Getting started with Fastly

After you’ve signed up for Fastly, you’ll need to do a little configuration to get it going:

In my case, I am using Heroku, so my address is a Heroku hostname. The “Address” field is cut off, but it is the same value as the “Name” field. 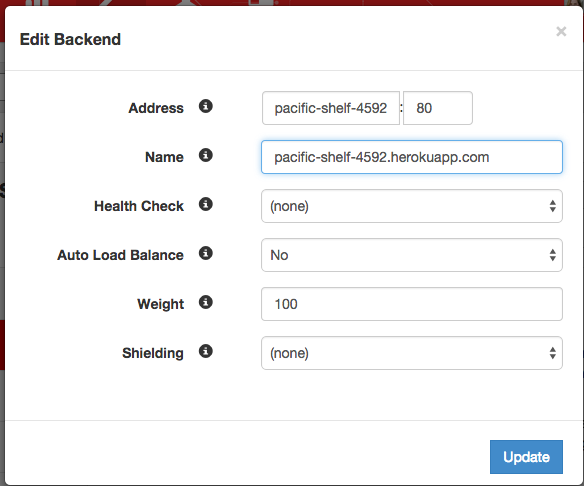 Set the domain to whatever you want your site’s domain to be. In my case, it was www.jessieayoung.com

Once the DNS changes propagate, you should see some new headers when you curl the site you are caching.

Compare the headers of the apex domain, which I have not set up to use Fastly and my www subdomain, which is pointing to the Fastly URL above:

These new headers are being set by Fastly. I am getting a MISS, which means that curl is hitting my web server rather than the cached version of the site. This is because I haven’t added Fastly to my Rails app. Next step: setting up the fastly-rails gem.

Add the Fastly environment variables to your .env file:

And add the Fastly configuration file:

Make sure you set these environment variables in your application’s staging and/or production environments. Fastly’s documentation contains detailed information on where to find your Fastly API key and Service ID.

Now, in the controller methods, you can use the set_surrogate_key_header method to tell Fastly what the values of Surrogate-Key should be for that page:

Passing an array of surrogate keys to set_surrogate_key_header tells Fastly which objects are included on that page so that when it comes time to purge, Fastly will know which pages display your object and thus need to be purged.

Setting the surrogate keys, like you did in the previous section, tells Fastly which objects are included on each page. Now, you need to tell Fastly when to purge the pages for each object. This can be done in the controller or via callbacks.

Including these purges in the controller will look like this:

Including these purges in the controller is ideal. If your application data is not hitting a controller during creation / deletion / update (eg: you are updating via Rails console or using an engine like RailsAdmin), you can instead include these methods as callbacks:

Creating a Rake task to purge all

While the setup above takes care of purging individual records, you will also want to purge your entire Fastly cache after each deploy of your application. This is easy to do via the Fastly web UI, but it’s even easier to do with this small Rake task:

Debugging tip: Fastly does not cache HTTP responses with cookies

As the fastly-rails README explains,

“By default, Fastly will not cache any response containing a Set-Cookie header. In general, this is beneficial because caching responses that contain sensitive data is typically not done on shared caches.”

The set_surrogate_key_header method removes the Set-Cookie header. In some cases, you may curl and find that the header is still there. After a thorough investigation, I found that my authentication library was adding Set-Cookie back in after it was removed by fastly-rails. Because Fastly does not cache responses with a Set-Cookie header, this meant that none of my pages were being cached.

To debug this behavior, I ran the handy rake middleware task, which outputs the middleware stack for the application. In the output, I saw the name of my authentication library’s middleware. To test whether this middleware was the culprit, I temporarily added the following:

With that, Set-Cookie was no longer being set and I had Fastly caching up and running.

Confirming that Fastly is working

To confirm that Fastly is working, run curl on your site a few times and confirm that the X-Cache header is returning a HIT. Once it is, you’re good to go!

Big thank you to the Fastly team for all of their help in getting my project set up and working properly. And a second big thank you to Harlow for helping me solve the Set-Cookie issue and being an-all around awesome dude.