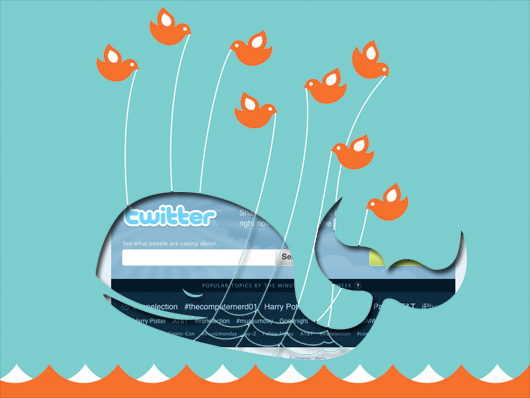 I’m sure we’re all familiar with Twitter, but if you’re not, their new homepage won’t help you out very much. I’ve been excited about this since I heard about it some weeks ago. On Tuesday, the release of this design only left me wanting more and I definitely expected something much different .

What Most People Think

I’ve been asking around for thoughts and opinions about the redesign and while everyone seems generally pleased that it was redesigned, most also feel that it really lacks that certain something. This post is going to try and figure out what that something is, and how the redesign could be further improved.

I think the visual aspects of the new homepage are a great improvement, the styles and graphic elements are solid and generally pleasing to look at. However, apart from the aesthetic improvements, there are certain things I would like to see added or modified.

Let’s start at the beginning… what Twitter started as. Twitter has been a glorified status update system since it’s birth - a fantastically simple system that was fun to use. The 140 character messages have been all that Twitter is and now the idea of these “updates” are seemingly missing from the homepage.

This being said, where did it all go? I tried to take a step back and look at the homepage from the perspective of someone who has never heard of Twitter before. All I managed to learn was that Twitter is a search engine with some sort of funny tag cloud. Obviously, I know that Twitter is more than a potential search engine, but as a new visitor, what more am I supposed to get from the information given? I can also “Sign up now” but what does this do for me? Even after clicking “Sign up now,” the page it advances to does not explain what I’m getting by signing up!

How To Improve The Redesign

So now I’m going to try and rebuild the homepage a little, in a way I may have done it. My biggest issue is the lack of explanation as to what Twitter actually is. I can’t find it anywhere. The best I get is “Join the conversation” in a very light blue that has poor contrast versus the medium blue background. If I didn’t already know what the conversation was, this would definitely not entice me to find out. I’d probably just assume it’s some lame feature that this search engine is trying to market at me. This is not just some lame feature, it’s all that Twitter is!

Another thing that isn’t sitting well with me is the entire trending topics section. Maybe I’m the exception but I did not see the title “Popular topics by the minute, day, and week” until it was too late. This title bar felt more like a divider between the top and bottom sections, not a title to the trending topics. The first things I noticed were the minute, day, and week icons and even knowing that these were trending topics from past Twitter knowledge, I did not understand what the icons were. I actually moused over the icons to reveal the alt description to understand their meanings. This is terrible usability and totally defeats the purpose of having an icon, completely counter productive.

Then, the actual topics themselves. I felt as though they were just random bits of text, like a misshapen tag cloud. I did not understand their organization or structure. This could be easily solved by listing them vertically instead of horizontally. After all, they are sorted by popularity, why not have the number one trending topic on top of a list?

My Reconstruction of the Homepage and Its Explanation

I have to preface this section by saying I’m not very good at writing copy text, and some of the messaging I came up with can almost definitely be improved.

I decided to throw together a simple mockup of how I might do it differently. Please click to view the full version, and by all means if anyone thinks they can do better than what Twitter did or what I did, post up!

The biggest thing I wanted to achieve was making sure the visitors know that twitter is this awesome status update/messaging service and not just a search engine. I tried to reinforce this message by changing the Share and Discover blurb to elaborate upon the Join the conversation bit. I also added the “and start tweeting” link beneath the sign up button, which would link to a definition of a tweet and a little information about tweeting.

I kept the search bar very prominent still because I am, in fact, a huge proponent of twitters quest to become a great search engine. I love the idea and in my experience it has worked wonderfully. But in order for it to succeed, they need new users tweeting.

Then, the trending topics. These were displayed very poorly, and something as simple as displaying them in a numbered list format works miracles for me. It’s much easier for me to understand that they are ordered by popularity and constantly changing order as they are discussed live on twitter. Along with the restructuring I supported the icons with the titles, in text, above topics that were being listed beneath them.

I know the changes I made were not that extreme but they do help the homepage serve it’s purpose of registering new users better than the current version. Visually, I did not want to stray from twitter styling, although I could have, I never felt as though the graphic elements were a problem.

Oh and a final problem, this is a HUGE pet peeve for me, no site can be a great site without a favicon: WTF is up with Twitters?!?! The favicon on blog.twitter.com is perfect quality - who let this beautiful favicon’s evil doppelganger take over.

I really think Twitter has the potential to be a great search engine, I already use it on a regular basis, but they can’t focus solely on this objective. Twitter stated in the redesign blog post that:

We’ll likely continue to make changes to the Twitter home page as we respond to feedback and ideas. We’re eager to see if encouraging a sense of wonder and discovery leads to a better first impression of Twitter.

I hope these changes take place sooner rather than later, for Twitters sake.