When testing a Rails application with RSpec, there are many different test types to pick from. When should you pick each type and how do you combine them into an optimal test suite?

All these different tests fall along a spectrum. At one end are unit tests. These test individual components in isolation, proving that they implement the expected behavior independent of the surrounding system. Because of this, unit tests are usually small and fast. Examples of unit tests are model and view specs.

In the real world, these components don’t exist in a vacuum: they have to interact with each other. One component may expect a collaborator to have a particular interface when in fact it has completely different one. Even though all the tests pass, the software as a whole is broken.

This is where integration tests come in. These tests exercise the system as a whole rather than its individual components. They typically do so by simulating a user trying to accomplish a task in our software. Instead of being concerned with invoking methods or calling out to collaborators, integration tests are all about clicking and typing as a user.

Although this is quite effective for proving that we have working software, it comes at a cost. Integration tests tend to be much slower and more brittle than their unit counterparts. Feature and request specs are both integration tests.

Many test types are neither purely unit nor integration tests. Instead, they lie somewhere in between, testing several components together but not the full system. For example, controller specs generally test some aspect of the model and helper layers in addition to the controller itself. 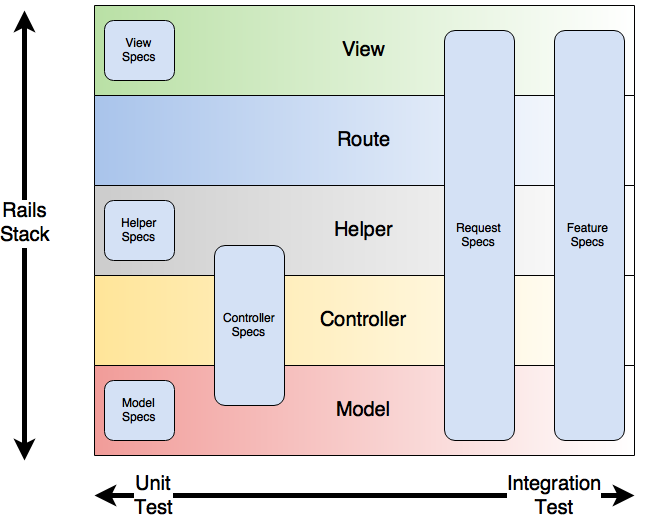 We like to build our test suite using a combination of these to create a testing pyramid. This is a suite that has a few high-level integration tests that cover the general functionality of the app, several intermediate-level tests that cover a sub-system in more detail, and many unit tests to cover the nitty-gritty details of each component.

This approach plays to the strength of each type of test while attempting to minimize the downsides they have (such as slow run times).

This post is an excerpt from our book, Testing Rails. Check it out if you’d like to learn more about how we test Rails applications at thoughtbot.