Whether you bought many game tickets or are ready to pack your clothes to fly away from chaotic London, there is one thing you can not ignore during the Olympic game period: the medal counts race among countries. The IOC states that the competition is among individuals, not countries, but that’s what most people get excited or emotional about.

I analysed the past Olympic data from various angles and created a few data visualisation apps. You can play with the apps so that you can find answers to the following questions everybody is curious about:

How is medal rank going to change throughout the game?

To answer the question, I collected the last three olympic final results (Beijing, Athens, and Sydney) from database olympics and rearranged the medal wining dates to fit into the London Olympics game schedule of top 12 countries that won medals (gold, as well as silver and bronze) throughout the three Olympics.

The graph shows the daily count of medals (“daily”) as well as the accumulated total (“total”). I also calculated the average counts among the three Olympics (“Average”).

The “daily” graph tells you certain trends of medal winning trend for each country. Some countries win medals consistently, while others stagnate in the middle or come in at the very end. The 3 trends I found were:

The “total” graph of 2008 tells you the dead heat battle between USA and China at the last Olympic games, but it also shows that the rivalry between the two only happened in the last Olympic games where China was the host nation. In “average” (see below), the USA dominates the medal race, but Russia comes back in at the end.

My answer to the first question is

Watch out for Russia. They will climb up the ladder in the final few days.

How does the hosting nation perform?

Why did I lay out like these? London was selected as the host city 7 years ago in 2005. My hypothesis is that the Olympics that was held 8 years prior to the hosting country’s Olympics reflects the usual performance of the nation, then the country’s medal performance improves because government spend more budget for sports, reaches its highest during their Olympic year, then declines after that. The graph shows the trend clearly except US at Atlanta. 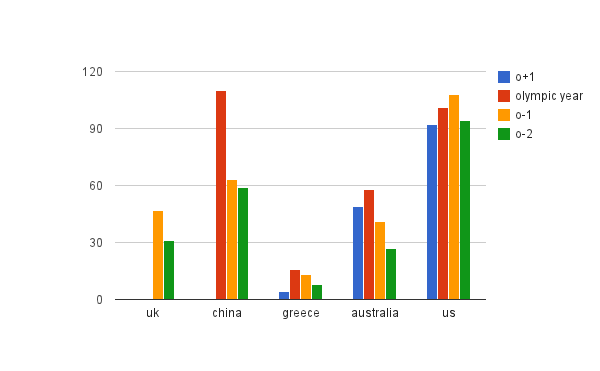 It is obvious that hosting country perform well, but how much does UK perform, and how less China will perform this time? The following chart shows where each country’s “o-2” is based as 1 and shows their growth towards their Olympic year. 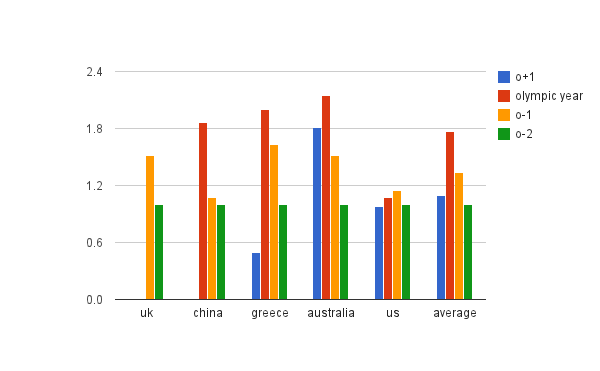 The above chart shows that Olympic year performs 170% better than the previous previous Olympic, then goes down to 110% in the following Olympic. The sample figures are so small, so it’s far from scientific prediction, but if you apply the ratio to UK and China, UK is going win 55 medals while China wins 65. 10 medal difference are not too apart.

Here is my answer to the second question.

It is more likely that UK get more medals than the last Olympic. Whether UK can get to 3rd place or not depends on how China’s medal counts drops after hosting Beijing.

What sports does my country do well and which countries are our rivals?

Before you find out what sports your country do well, it’s worth exploring what kind of sports contribute to medal counts more than the others.

There are over 30 different sports in the Olympic. People’s eye tends to go into popular sports such as Swimming, Track & Field, Tennis, and Football, though some less popular sports contribute to the medal counts race more. The following are the donuts chart of medal counts breakdown per category. Like other graphs, you can filter by Olympic years or category names.

And here are the top 6 most number of medal generating sport categories.

You can scope this chart by Olympic years as well as each country, and here are dominant sports of 7 countries.

This gives you interesting rivalry between top ranking countries. While many top countries compete medals in Cycling (AUS, GER, FRA, and GBR) and Swimming (USA, AUS, GER, and FRA), there are some sports where top countries are not competing as much, such as Judo for FRA and Weightlifting, Diving, and Shooting for CHN (Did China carefully choose the sports to invest so that they are less likely to compete against top medal ranking countries?). To visualise each country more clearly, I created a Chord diagram that shows relationship of countries that shared podium in the same event.

The overall relationship of each country are rather confusing. It becomes interesting when you filter the diagram via category you are interested in.

For GBR, the biggest rival of Cycling is AUS , that of Track & Field is RUS, and that of Sailing is USA.

The answer to the last question depends on which country you support for. Have a look around the app to see if you can find interesting rivalries.

The data and Hackathon around the London’s summer of sports

I used Ruby to scrape the data and d3.js for visualisation. I also used Guardian’s Miso project for one of the visualisation apps.

Data for the schedule app are at

Data for category and and rivals app are at

One note about “summer_results.json”. This data includes all the medalists information, and it does not represents medal counts per country as is because it list all medalist names. For example, there are 12 gold medalists for 2008 Basketball, though it should be counted as 1. To work around, you need to aggregate by year, country, medal, and event. This does not work in rare occasion if one country got 2 bronze medals in a individual tournament (such as Judo), but gives you approximate counts.

You can do a lot of interesting analysis and visualisation around Olympics and there will be more interesting data once the event starts.

We are organising a “Hackathon” (“Hack” + “Marathon”) where graphic designers, programmers, journalists, sports enthusiasts, and anyone with cool ideas and data gather in one place during a weekend to create something cool, fun and useful around the theme of London and Sports. If you are interested, please check out MMXII Hack.