If you’ve ever tried to create your own iOS framework, you know that it’s not for the faint of heart – managing dependencies and writing tests doesn’t make it any easier. This tutorial will walk you through creating your first iOS framework from start to finish so that you can go out and create your own.

We’re going to build a framework that exposes a function called RGBUIColor(red:green:blue) that returns a new UIColor created from those values. We’ll build it using Swift, with Carthage as our dependency manager. Our framework will be consumable using Carthage, CocoaPods, or git submodules.

Setting up the Xcode Project 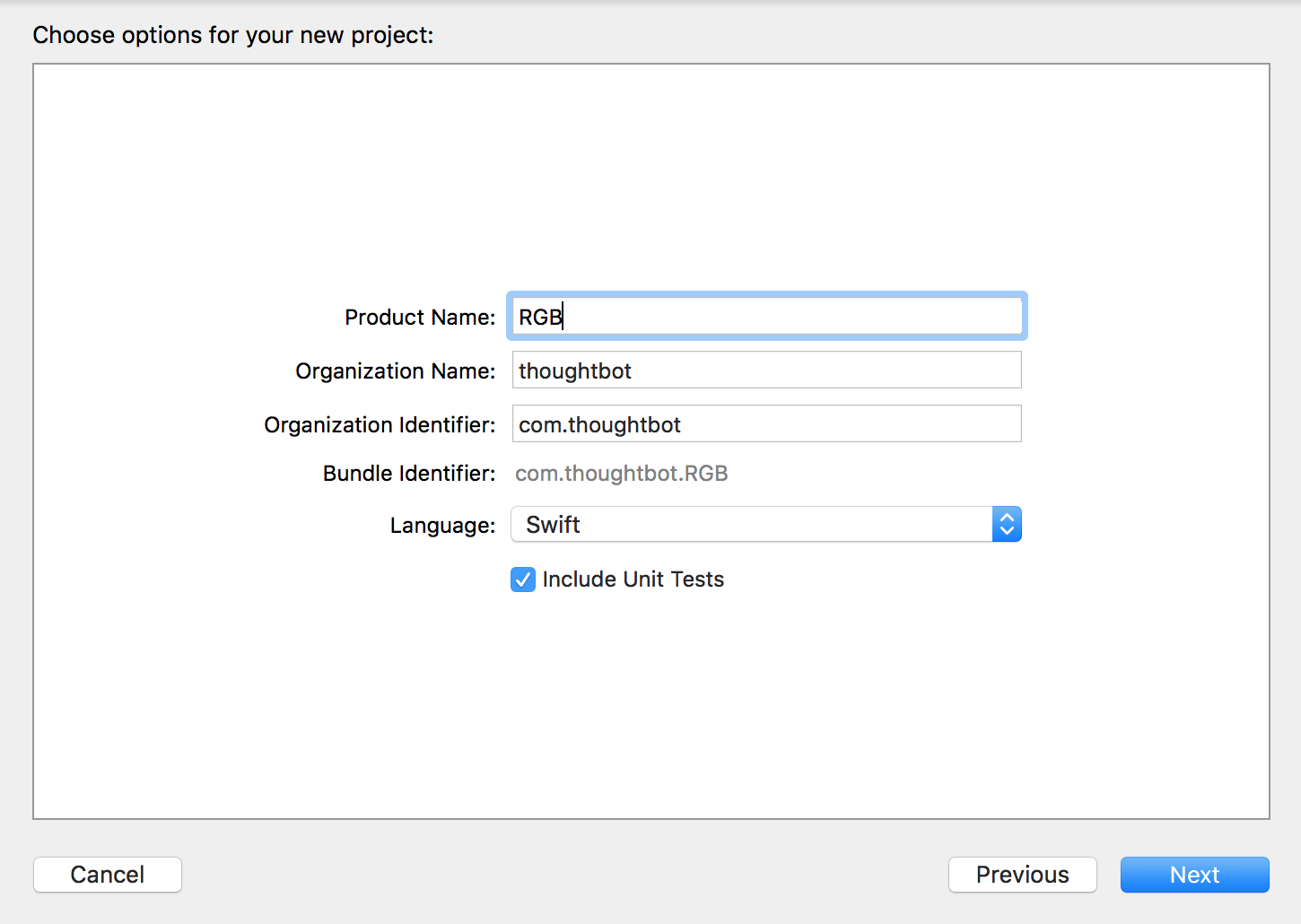 Let’s jump over to the terminal.

First, navigate to the directory you saved your project in.

Here’s a standard one for Swift projects with a few modifications. We added .DS_Store and removed fastlane and extra comments.

In this script, we make sure the user has Carthage installed and run its update command to install the iOS dependencies.

With bin/setup created, let’s run it so that Carthage will download our dependencies.

Now we need to set up our project to build and link the new dependencies.

Adding Dependencies to the Workspace

Since our dependencies are submodules, we need to add them to our workspace. 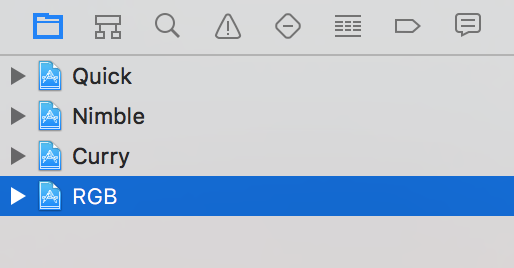 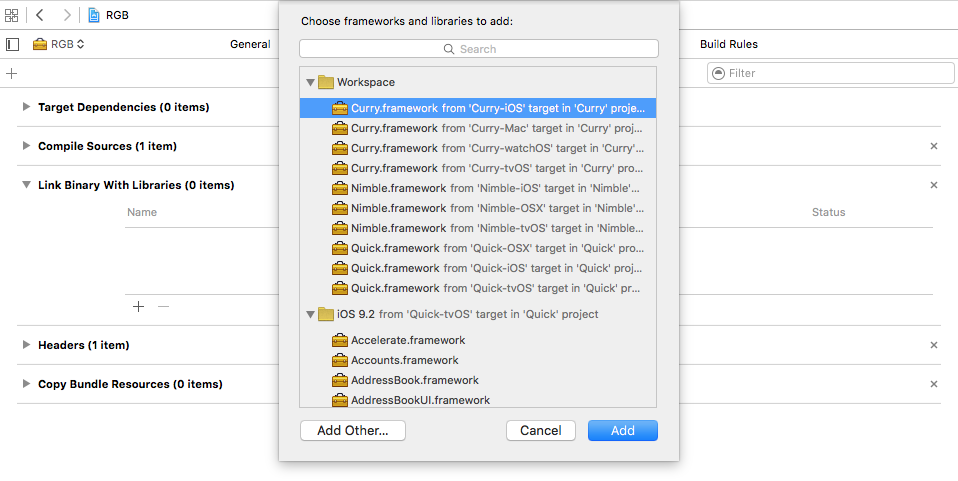 When adding dependencies to each target, Xcode will automatically add them to the “Framework Search Paths” under the “Build Settings” tab. We can remove these from the “RGB” and “RGBTests” target because Xcode treats them as implicit dependencies due to them being in the same workspace.

Now that Carthage is set up, let’s add CocoaPods.

To add CocoaPods support, we need to create a .podspec at the root of our project and fill in our project info.

One line to pay attention to is spec.dependency "Curry", '~> 1.4.0'. Because we’re supporting CocoaPods, we expect the consumers of our framework to be using it instead of Carthage, so we have to specify dependencies here and in the Cartfile.

Once this is set up we can run the pod lib lint command to test that everything is configured properly. If all goes well, we’ll see something like this:

With the project and dependencies set up, we’re almost ready to write some code. Before we do that, let’s create our first commit.

Open RGBTests/RGBTests.swift so that we can take a look at the default template. It uses @testable and XCTest, but we’ll be changing both of these.

We’ll remove @testable because we want to test the public API that consumers of the framework will use. As our framework grows, we may need @testable to test parts that are not exposed publicly; generally we want to avoid that so we are testing what’s exposed to the consumer. This feature is most useful in testing applications rather than frameworks.

From the Apple Docs on Testability:

With testability, you are now able to write tests of Swift 2.0 frameworks and apps without having to make all of your internal routines public. Use @testable import {ModuleName} in your test source code to make all public and internal routines usable by XCTest targets, but not by other framework and app targets.

We’ll use Quick and Nimble for testing. Quick provides a nicer testing interface with a behavior-driven style that is very similar to RSpec and Specta; Nimble gives us many powerful assertions and the ability to write asynchronous code with less boilerplate.

Once those changes are made, the test file should look like:

Run the tests with ⌘U or Product → Test and they should be green.

If we run the tests, now they will fail as we expect. Swift’s type checking will prevent us from running the tests because we never defined the RGBUIColor function.

Right click on the “RGB” group in the Navigator and select “New File”.

Create a Swift file called RGBUIColor.swift and save it. Fill it with this implementation:

The use of curry here is used as an example of using a runtime dependency. This is a non-standard use and doesn’t provide any value here. 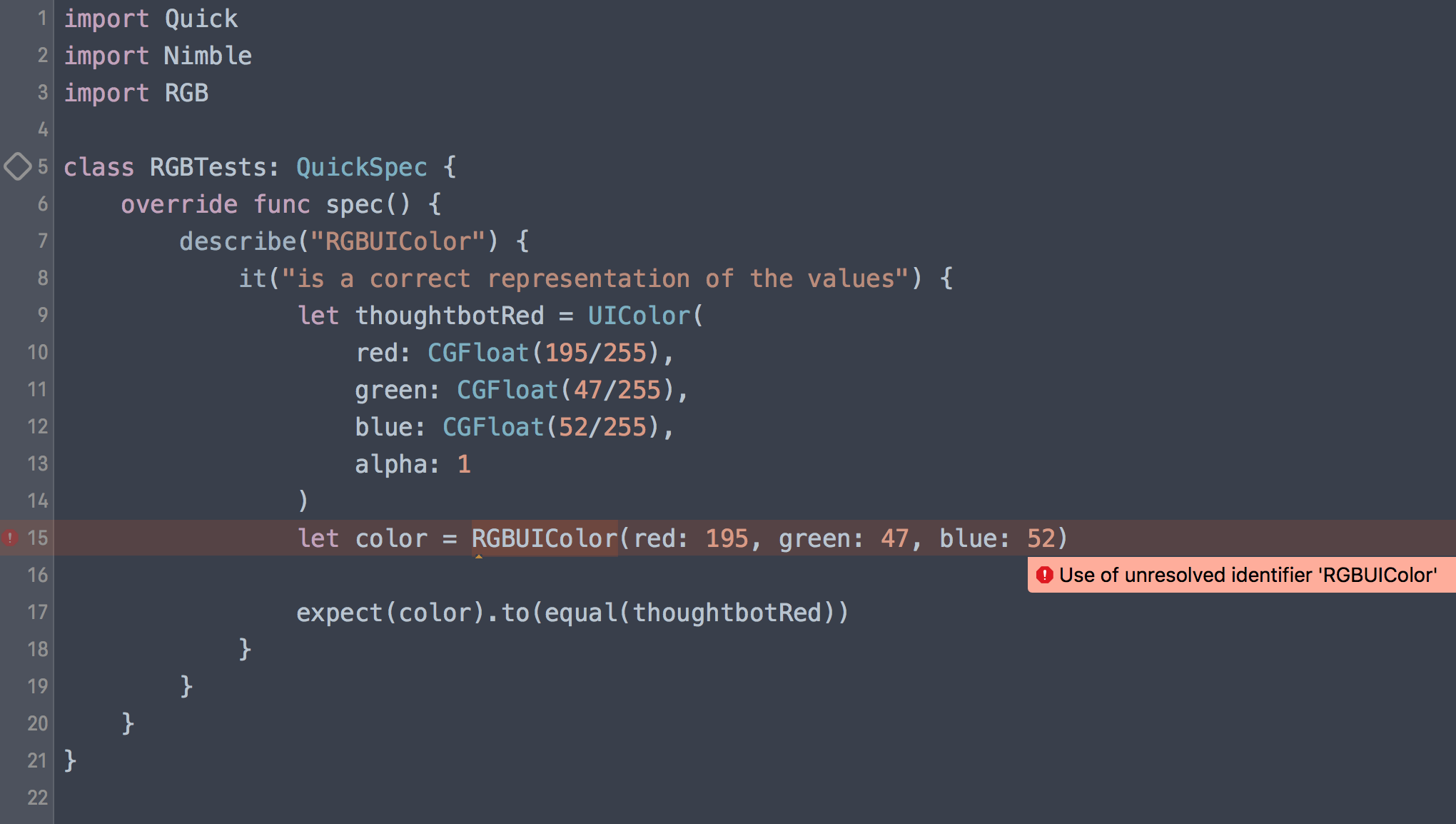 At first glance, this error may seem a bit odd. We clearly defined the RGBUIColor function, right?

We did, but it’s not marked as public.

What this means is that if someone tries to use our framework, they won’t be able to see this function. If you want to see the difference in action, add @testable back and your tests will pass.

Experiencing this error is why we removed the @testable from the import at the beginning. It helps us to catch these kinds of errors earlier, before we release our framework to others.

To fix this, let’s mark the function as public like so:

That’s it. There were a lot of steps but we’ve successfully created a marginally useful framework that could be published to GitHub. As a matter of fact, we published the source for this framework on GitHub.

We can’t wait to see what kinds of awesome open-source projects you’ll create.