This is the API-focused sequel to the Web-focused post. As before, the main take-away from this post is to always check return values. A corollary is to design the user experience to include error messages in a helpful manner.

APIs have errors too

The second example is the more complex flow: sync and async with a service object behind an API. We need to report as many errors as we can – if we’re performing a synchronous task, we need to dispatch on its result – but also save space for errors further down the road. The UI dictates various pieces of communication, and we need to fulfill that communication. 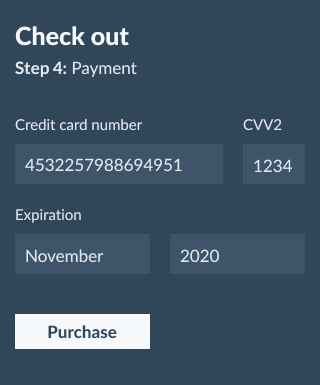 As mentioned before this is a two-way street: the user experience team that builds the UI needs to work with the developers to understand what can go wrong. Sometimes the developers won’t find out until implementation is underway, and so the designers need to stick around and be prepared for an overhaul. 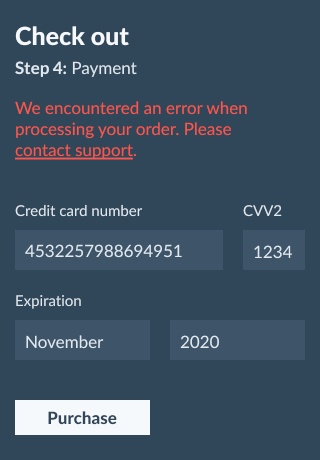 With an API there is a level of indirection: the UI team, mobile and other client teams, and backend team must work together to understand all that can go wrong and how the user should know about it. 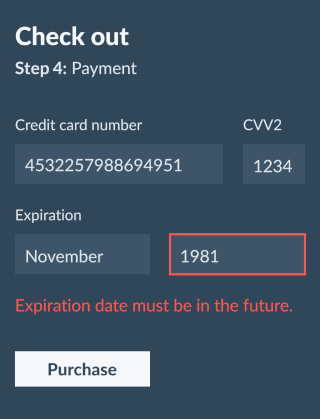 This represents the “just before the view” point in an API. Let’s see what it takes to fill in the rest.

Playing with the full orchestra

Let’s start the service object by scoping out a naive implementation of our Checkout#commit method. This has a bug!

The issue is that we’ve violated our contract: we need #errors to produce any errors that we can generate synchronously. Our call to #update could generate useful errors – for example, if the user tries to press “Checkout” in a stale tab on an old cart – but we drop them into the bit bucket instead. Moreover, we march forward on an invalid update, enqueuing the job to charge the customer regardless.

By now we’re deep down the code path, far from the ERb view rendering this. Whatever decisions we made up the callstack are going to be hard to change now. This is often where people reach for exceptions. Note that a stale cart is not an exceptional situation; we’re reaching for an exception instead because we coded ourselves into a corner.

And honestly, I’d rather see #update! than an unchecked #update. At least it’s not hiding a bug.

But the better solution – and, luckily, the actual design we had set ourselves up for – is to leave the exceptions for the exceptional cases but to treat a failed #update as something we can tell the user about.

Let’s go into detail about our method calls.

As was discussed with #find_by, an #update can raise an exception on database failures. These are programmer bugs, which we are letting bubble up. It’s good that we’re considering these exceptions and recognizing how we want to handle them.

Next up is the #perform_later method, part of ActiveJob. This is documented to return an instance of the job class; it does this by calling the #enqueue method, which returns the job instance, or false on failure. This is exactly what we want out of our #commit method, so we can just return that. Perfect.

Perfect? What if the order is marked processing, but the payment processor fails to enqueue? What if the underlying queue adapter raises (such as during a lost Redis connection)?

Ick. How about we enqueue it first, with a delay, then cancel it ASAP if the #update fails?

No one said this was easy.

This covers the synchronous errors, but now we have a background job that is about to make a network request. As the comic says, “oh no!” 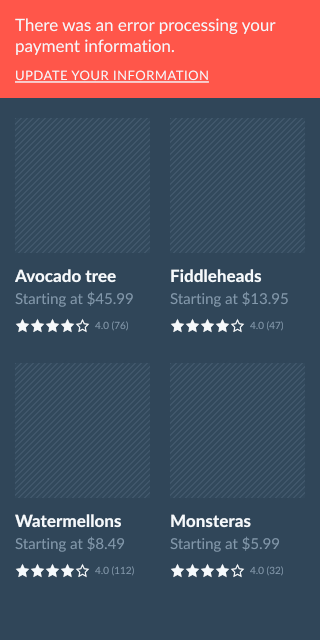 We need to communicate these errors back via the API. Assuming GraphQL and a patient mobile development team, we’re talking about a subscription. We’ll listen for subscription requests by the job ID, and on job updates we’ll send back a job status.

We need more infrastructure. Here’s the first pass of the background job:

Our hypothetical payment provider offers a #capture! method to finalize the charge, but it raises an exception. So here we have to decide: do we let this exception bubble, or do we transform it into something else?

Astute readers will notice a mistake we’ve mentioned already, but there are two other errors that stand out to me.

We are using ActiveJob’s GlobalID mechanism to pass full objects through to the job. If the Order object is deleted from the database before this job runs (remember that five second delay at the end of the prior section?), this will cause ActiveJob to raise an ActiveJob::DeserializationError. That said, our Order objects are permanent; if one is deleted, this is a programmer error, and should bubble up to our exception tracker.

However however!, we would violate our contract – to notify our API subscribers – if we simply bubbled up; we need to notify along the way. Let’s use rescue_from to handle all exceptions with a notification and then re-raising:

The next issue that stands out to me is the fact that our payment provider is making a network call. This can lead to timeouts, DNS errors, TLS errors, TCP errors, and HTTP protocol errors. Those are most definitely going to come in as exceptions. Some of these exceptions mean we should try again in a minute, and some don’t.

The retry is a notable aspect often left out of UI-related async discussions. The user will have some expectation that things are going well unless they hear of an error. After a discussion with the product team, everyone agrees to let the API know when a job is taking longer than expected, to allow the mobile team to experiment with informing the user.

With that in place, this example still fails to apply lessons from an earlier section: we call #update without checking the return value. But what does it mean for the #update to fail? Again, a corner case that did not come up during the design.

For the #update to fail would mean that the customer is charged but the order is in a processing state. It will appear in their list of in-progress purchases – at this point, forever – but their credit card bill will reflect the reality that they have paid for the product. And without moving to the completed state, the fulfillment center will never see it.

The stakes are high, but luckily this specific failure is rare. The solution here can be as simple as notifying the customer support team but otherwise treating this as a success.

Let’s leave the mail failure for the exception tracker. This allows us to complete the checkout flow just in time to end this article.

We followed two common examples – authentication and checkout – through all their error handling woes. Along the way we uncovered corner cases and found places where the design did or did not lend itself to helping the user through failure. The design dictated the implementation; thinking about errors up-front helped us build out a system for handling most of what can be thrown at us.

For each method we used, we thought through its failure modes. This included its return value, its documented inputs, and its exceptions both known and undocumented. We bucketed failures into user-fixable, user-visible, and programmer error, and we handled each bucket differently.

Following this practice exposed a stable series of patterns that will reduce the growing noise of exceptions accumulating in the exception tracker and also reduce the number of bugs hiding for users to discover after the next refactoring.

With a little forethought and discipline, our users can have a more informative and stable app experience.

(Thank you to Eric Bailey for his wonderful UI mocks used throughout this post.)