On a recent project we had to do a lot of work with WebGL. The most difficult and frustrating thing about the project was the lack of good resources on working with WebGL, especially for non-trivial projects. What I did find was usually focused on just having code that puts pixels on the screen, but not how it worked or why. If you’re interested in learning WebGL, these posts will take you from zero to a working 3D application, with an emphasis on how the various concepts work and why.

WebGL is a thin wrapper around OpenGL ES 2.0 that is exposed through a JavaScript API. OpenGL is a low level library for drawing 2D graphics. This was a major misconception for me. I always thought that it was used to produce 3D. Instead, our job is to do the math to convert 3D coordinates into a 2D image. What OpenGL provides for us is the ability to push some data to the GPU, and execute specialized code that we write on the GPU rather than the CPU. This code is called a shader, and we write it in a language called GLSL.

To get started, we need to understand a few core concepts.

We need to write a bit of boilerplate to get everything wired up to start drawing on the screen. The first thing we’ll need is a canvas tag.

In our JavaScript code, we need to find the canvas, and use it to get an instance of WebGLRenderingContext. This is the object that contains all of the OpenGL methods we are going to use. The documentation for WebGL is generally quite lacking, but every method and constant maps to an equivalent method in the C API. The function glVertexAttrib1f in C would be gl.vertexAttrib1f in WebGL, assuming the variable gl is your WebGLRenderingContext. The constant GL_STATIC_DRAW in C would be gl.STATIC_DRAW in WebGL.

The next thing we’re going to need is an instance of WebGLProgram. This is an object that will hold information about which shaders we’re using, and what data we’ve passed into it. As we initialize the program, we are going to want to compile and link our shaders. We’re going to need the source code of the shaders as a string. I prefer to write them in separate files, in order to get syntax highlighting and other file type specific helpers from my editor. In a Rails app, we can just spit out the files into the page server side.

Now in our JavaScript, we can create a few helper functions to create a program, compile our shaders, and link them together. To compile the shaders, we need to do three things:

Once we’ve got both of our shaders, we can create the program, and link up the shaders. Let’s create an object that wraps up this process for us. You can find a gist here.

We’re going to call createProgramWithShaders, giving it the name of the files to use for the vertex and fragment shaders. We assume that all vertex shaders are going to have the word “vertex” in the name, and that fragment shaders will have the word “fragment”. After compiling each shader, we attempt to compile it and check for errors. Finally, we attach the shaders to our program, and try to link the shaders. If all of this succeeded, the result will be an instance of WebGLProgram

Now we can start writing actual code! We’ll start by writing the simplest possible vertex shader. It will do nothing but return the input unchanged.

An attribute is the primary input to the vertex shader. We’re going to give it an array of values. OpenGL will loop over them, and call this function once per element. The function doesn’t actually return anything. Instead, we set a local variable called gl_Position. That variable expects a vec4, which means it has an x, y, z, and w, rather than a vec2, which just has x and y. z works like the z-index property in CSS. w is a value that every other axis will be divided by. We’ll set it to 1.0 for now, so nothing is affected.

Once the vertex shader has set enough points to draw a triangle, the fragment shader will be called once per pixel in that triangle. For now, we’ll just always return blue.

Sending Data to the GPU

The last step is to wire up our program to our rendering context, pass in the data, and draw a triangle. First we’ll make sure our screen is in a consistent state.

clearColor tells the GPU what color to use for pixels where we don’t draw anything. We’ve set it to white. Then, we tell it to reset the canvas so nothing has been drawn. The next then we need to do is give our program some data. In order to do this, we’ll need to create a buffer. A buffer is essentially an address in memory where we can shove an arbitrary number of bits.

OpenGL is highly stateful. When we call bufferData, we never specify which buffer is being used. Instead, it works with the last buffer we passed to bindBuffer. gl.ARRAY_BUFFER tells OpenGL that the contents of this buffer are going to be used for an attribute. gl.STATIC_DRAW is a performance hint that says this data is going to be used often, but won’t change much.

Now that we’ve put the data in memory, we need to tell OpenGL which attribute to use it for, and how it should interpret that data. Right now it just sees it as a bunch of bits.

The first thing we need to do is get the location of the attribute in our program. This is going to be a numeric index, based on the order that we use it in our program. In this case, it’ll be 0. Next we call enableVertexAttribArray, which takes the location of an attribute, and tells us that we want to use the data that we’re going to populate it with. I’ll admit, I don’t know why you would have an attribute present in your application, but not enable it. Finally, vertexAttribPointer will populate the attribute with the currently bound buffer, and tell it how to interpret the data. This is what each of the arguments mean:

Finally, we need to tell it that we’ve finished giving it all of the data it needs, and we’re ready to draw something to the screen.

drawArrays means that we want to loop through the attribute data, in the order that it was given. The first argument is the method we should use for drawing. TRIANGLES means that it should use every three points as a surface. It would take 6 points to draw two triangles. There are other options, such as TRIANGLE_STRIP, which would only take 4 points to draw 2 triangles. There’s also POINTS or LINES, which completely change how a single triangle is drawn. The second argument is which element in the array we should start from. The final argument is the number of points we’re going to draw. The end result, is a simple triangle. All of the code used for this sample is available here. 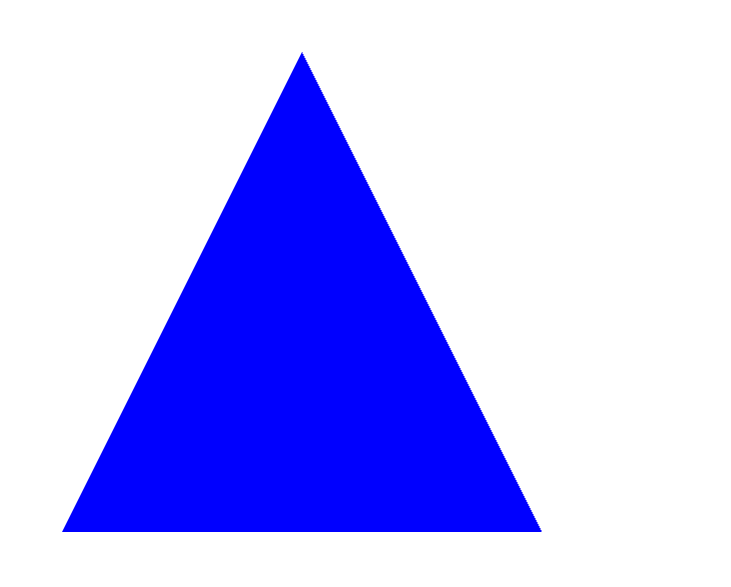