You’ve added the INDEXes, both partial and covering. You’ve VACCUUM ANALYZEd. You JOINed and INNER JOINed everything to a single query. And yet, your report is still taking too long. What do you do when the low-hanging fruit has been harvested?

It’s time to get down and dirty with some of the lesser known SQL constructs in Rails land.

If you’ve gotten this far, you’re probably familiar with using EXPLAIN and EXPLAIN ANALYZE to get insight into what approach Postgres is taking to execute queries and the actual performance of those approaches. You know that an Index Scan is preferable to a Seq Scan, but you’ll settle for a Heap Scan as a Join Cond.

Query plans aren’t the easiest thing to read, however. They’re packed with information and it’s closer to being machine parsable than human readable.

Postgres Explain Viewer (PEV) is a tool to simplify reading query plans. It provides a horizontal tree with each node representing a node in the query plan. It includes timing information, the error amount in the planned versus actual times, and badges for interesting nodes like “costliest” or “bad estimate”. 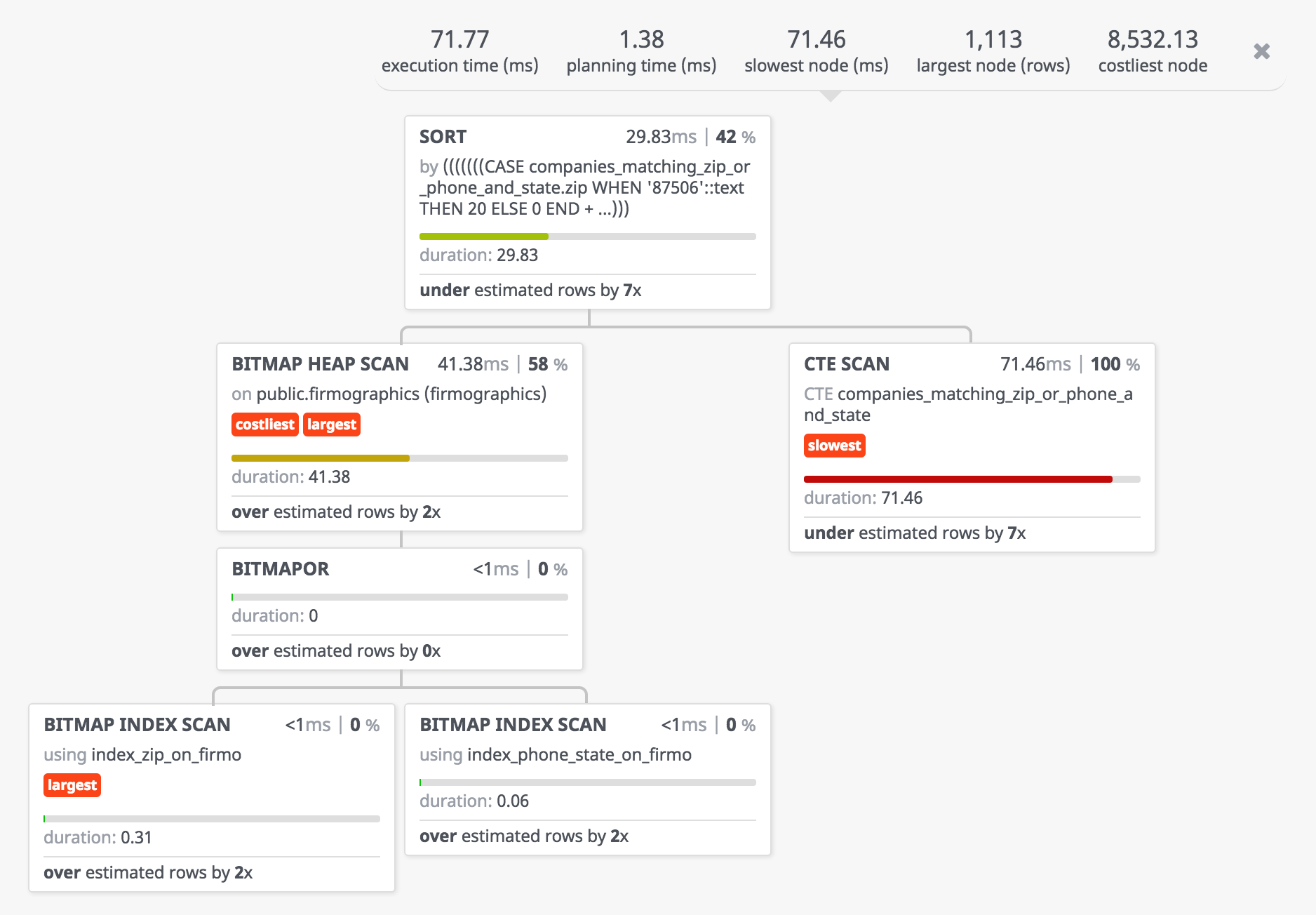 It’s pretty useful to have at-a-glance feedback about your query. But knowing how long queries take is just the beginning: what can we do to speed these up?

Views are a tool for storing “partial queries”. That is, they allow the database to store a parsed query that you can treat as a table in most respects later. You can SELECT (and sometimes UPDATE or DELETE) from a view with identical syntax as if you were executing the statement against a table. They’re useful when you’d like to perform a complex statement repeatedly and don’t want to deal with cluttering your Ruby files with arcane ARel or strung-together scopes.

Making liberal use of views is a key aspect of good SQL database design. Views allow you to encapsulate the details of the structure of your tables, which might change as your application evolves, behind consistent interfaces.

Materialized views are especially helpful when your select list includes a subset of columns, you perform identical operations such as COUNT or SUM or extracting part of a jsonb object on every query, and when JOINing additional tables. When it comes time to actually retrieve rows, these rows can be queried against to return only relevant data. This is often cheaper to execute than a full statement. These can be further beneficial by creating indices on the materialized views themselves (such as on the column you’re JOINed by, or on a data column for a reporting query).

As an aside, Ruby on Rails does not have first-class support for views, despite that from a usage perspective they’re very similar to tables. We maintain a Rails extension, Scenic, which helps with versioning, migrating, and maintaining SQL views.

The 37 minute query plan above can’t be improved on by a materialized view, unfortunately, because there aren’t any good candidates for caching partial results. This was an exceptional case and I was surprised to find that this feature wouldn’t be helpful to me.

Common Table Expressions such as WITH expression_name AS (...) SELECT ... and Subqueries such as SELECT ... FROM (SELECT ...) AS subquery_name are tools for breaking up complex SQL queries, and sometimes the only way to achieve a goal. While CTEs are arguably easier to read than subqueries, in Postgres they are an “optimization fence”, preventing the query optimizer from rewriting queries by moving constraints into or out of the CTE. For example this query:

The query could be optimized by “pushing” the WHERE clause into the subquery to avoid performing the read and count operations for every row in big_table:

However, a CTE such as this would prevent the optimization, causing the entire table to be read, aggregated, and materialized to disk before being re-scanned from the materialized table for the x = 42 constraint:

There are also times when the optimization fence is useful, such as when using data-modifying statements (INSERT, UPDATE, or DELETE) in WITH. As the CTE is only executed once, the result is the same where a subquery is allowed to be called multiple times by the planner and would not return information from deleted or updated rows.

Both Common Table Expressions and subqueries are useful, and one or the other may be more performant in a specific case. This is one example where subqueries are the better option, but I usually find that a CTE is as faster or better than a subquery and lean on them most of the time. Experiment with both forms in EXPLAIN ANALYZE to find the right tool for your query.

Control yourself; Take only what you need from it

The common answer to why we should SELECT col1, ..., colN rather than SELECT * is that we reduce network traffic. In most cases, for reasonably normalized databases, and with today’s high-speed network connections, this is unlikely to be a huge deal. In one example involving 326/89K rows, the difference in network traffic caused by selecting a single column versus all columns was about 10%.

A better reason to limit columns to only what’s needed is index lookups. We want the planner to hit indexes instead of doing a sequential scan of the table itself. We generally optimize this by creating indexes on important columns such as foreign keys and of course primary keys come with an index by default. These are great, helping to identify the disk location of rows that match whatever constraints we have in a query for easier lookup or ordering.

We can also use covering indexes, which include the specific columns and expressions useful to a query, to store all of the relevant information. This prevents the second step of reading from the table itself and can provide a big performance gain. Using * as the select list in a query would likely not make use of a covering index unless you index the entire table and keep it up-to-date with added columns.

Prepared statements split the work of parsing, analyzing, rewriting, planning, and executing a statement in the same way that materialized views split the work of preparing parts of queries that don’t change by caching their results. When a statement is prepared, Postgres parses, analyzes, and rewrites it. It generally uses placeholders for values being provided at EXECUTE time.

PREPARE is an optimization for the very specific use-case of similar statements being executed many times in a single session. Prepared statements are not persisted or shared between sessions, so they’re not something you can use to optimize a general use without setting up session connect events externally.

Since we previously mentioned that Rails does not support views, it’s only fair to point out that since version 3.1 it does make use of prepared statements.

Do more in the database

The ultimate Postgres performance tip is to do more in the database. Postgres is optimized to be very efficient at data storage, retrieval, and complex operations such as aggregates, JOINs, etc. Let your web application deal with displaying data and your database with manipulating and converting data. Becoming comfortable with using Postgres for even the most complex reports starts with familiarity with using it, from its syntax to its functions and types. Read the Postgres documentation as you do the Ruby, Go, or Elixir docs.